Be who you are and say what you feel, because those who mind, don't matter, and those who matter, don't mind. ~Dr. Seuss
Girls just wanna have fun ~ Cyndi Lauper
Make some fun, happy time ~ Alex Ovechkin

Hockey in BlondeSpeak - Shake That Rust Off, It's Hockey Time Again!

NHL hockey is back tomorrow! Need a little refresher course on the terminology you'll be hearing? Never fear, BlondeSpeak is here; to simplify all the gibberish you'll hear. (Yes, I took a poetry course during the lockout, specializing in dirty limericks; but that's for another post on another day.)


If you are a little rusty, brush up on your hockey terms so you know what's going on while you listen to Joe and Locker (or whoever your particular commentators are for your team if you're not a Washington Capitals fan. Wait...if you aren't a Caps fan, how the heck did you end up here?) And remember, BlondeSpeak is not meant to be technical, it's just the basics in simple language, you know, for blondes and wanna-be blondes.


Attacking zone: Ok, this is kinda a no-brainer, but maybe you’re not sure. So, when a team is on the attack, their attacking zone is between the opponent's blue line and goal line.


Breakaway: A player in control of the puck has a breakaway when the only opponent between him and the opposition's goal is the goalie and there is a reasonable scoring opportunity. You’ll hear this often, but sometimes it goes pretty quick and you miss the actual execution.
Charging: No, it has nothing to do with a credit card. It’s when the "actions of a player or goalkeeper who, as a result of distance traveled, shall violently check an opponent in any manner”. So in this case “distance traveled” is akin to something like more than three strides before deliberately smashing the living sh*t out of him. Pretty broad interpretation allowed for the refs here, no wonder so many coaches argue when it happens. Oh yeah, it can also result in a game misconduct or a suspension if the infraction is deemed severe enough. Really broad interpretation allowed, hope there are good ref’s on the ice…Yeah, right.


Dump and chase: “An offensive strategy used to get the puck over the opposing team's blue line and into the corners where players can race to get it, thereby moving the play into the attacking zone”. Basically, they dump the puck down the ice and everybody chases after it. Simple, right?


Half Boards (or half walls): The half boards are not the short wall around the rink. It really is an actual specific location. It’s the areas along the side boards, half-way between the blue line and the goal line.


Odd-man Rush: Sounds like a dance, right? An odd-man rush happens when the team with the puck has one more player entering the other team’s zone then the other team’s defense (i.e. 2 on 1 or 3 on 2)


Offside: When a player crosses the attacking blue line before the puck does, the team is called for offside. A face-off then takes place just outside that blue line (in the offending player's defensive zone). The determining factor in most offside situations is the position of the skates: both skates must be completely over the blue line ahead of the puck for the play to be offside. That’s why you’ll sometimes see a player standing on either side of the line waiting for the puck; he's getting as close as he can get without going over. Yeah, sometimes that plan doesn't exactly pan out.
The Point: The point is the area just inside the opposition's blue line close to the boards on either side of the rink. Usually a defenseman usually parks himself there when his team is in control of the puck in the opposition's defensive zone. Playing the point has some responsibilities. It includes trying to keep the puck in the offensive zone when the defensive team attempts to clear it; receiving a pass from the forwards to allow the play to reset, and taking slap shots at the goal, hoping to create a rebound or a deflection. On the power play, however, one of the positions is often played by a forward and he attempts to control where the puck goes through passing, and also takes lots of shots. LOTS of shots if he can.


Referee's crease: Yes, there actually is a referee’s crease! It’s the semi-circular area at the red line, beside the scorekeeper's bench, which a player may not enter when it’s occupied by a referee during a stoppage of play. Ever notice how players hang back when refs are conferring about a play or on the phone for a ruling from Toronto? Yeah, the ref’s in HIS crease and nobody better enter it. If they do, the player could get a misconduct penalty, but usually the ref politely asks the player to move his ass away. (I just threw this in because I thought it was interesting, you’ll probably never hear any reference to it during a game, ok?)


The Shots: There are three common shots you’ll see and hear about, sometimes it’s hard to tell the difference and you have to trust the commentator to tell you what you just saw. But, here are the very basic descriptions of them. You’ll understand them better if you watch the replays or rewind your DVR and slow the action down:


Slap shot: A slap shot occurs when the player swings the stick back and then quickly forward, slapping the puck ahead with a forehand shot. It’s a forceful shot, usually with a big wind up, where the player bends his stick on the ice and allows the energy stored in bending the stick to launch the puck forward.


Wrist shot: A wrist shot is when a player shoots the puck off the blade of the stick with a flicking motion of the wrist. Normally a shot with accuracy and quick delivery. Wicked Wrister!


Snap shot: A snap shot is a like an abbreviated slap shot, and combines the advantages of the wrist shot (speed and accuracy) and the slap shot (force). 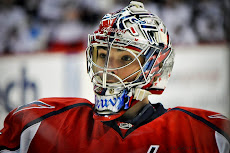 Caps_Girl
is a Washington Capitals hockey fan who enjoys long walks on the beach, Belgian beer, stalking from behind a camera lens, good snark and has an unhealthy obsession with hockey goalies and baseball catchers. Her favorite color is Caps red and her one wish is for Whirled Peas...Any questions?

The Blonde Girl's Guide is in no way affiliated with the Washington Capitals, the NHL, or its Properties. All posts are for entertainment purposes only and the opinion of the author unless otherwise noted.

Photographs watermarked ©CapsGirl.com are the sole property of the author. If you would like to use any photograph posted on this site or from my Flickr account, please @ me on Twitter with your request and I will gladly send you a .jpeg file for your use.

Guys Who Give a Puck

Your Girlfriend Wears Their Hockey Jersey

These Are the Experts, They Saw the Replay

The Way Back Machine

Tumblr: For When 140 Just Isn't Enough